I hope that by posting this video a small miracle will happen and Robin's husband Jason will have her things returned. 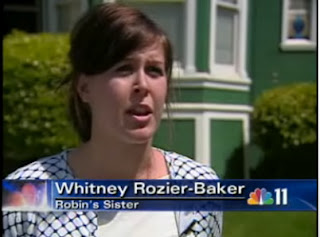 Here is the story as reported by NBC 11, San Francisco.

Robin Groff died Friday after a long battle with Leukemia. She'd fought to prolong her life so that she could spend more time with her 4-year-old daughter and her husband. But her life ended Friday in a Texas hospital, where she'd gone for treatment.Her husband, Jason, stopped in San Francisco's Haight Ashbury area on his way home to Sacramento to break the news of her death to friends. But at about 2 p.m. on Sunday, someone broke into the family car.The thieves took a black leather satchel containing the last mementos of Robin's life. Inside were her wallet, funeral preparations, her final notes, and a cherished piece of jewelry -- her wedding ring. The ring was to be given to her daughter.The family said they know it's unlikely the items will be returned, but they remain hopeful.Anyone with information in the case is asked to call San Francisco police.
Posted by Christine at 11:52 AM

Hello Christine. We've not met, but I was Robin Groff's good friend, Tianne. She told me several times about you, your strength, and how much she enjoyed your friendship and bright smile. She relayed to me more than once her admiration for your struggle, your beauty with film, and how she appreciated having someone like you to relate to over the leukemia. You look so bright and I was there at Robin's service on Friday and I think you were there, speaking to Natalie. If that was you, I wanted to hug you for the strength and love you brought to Robin. May God bring you continued remission to still speak your stories, sing your song, and add awareness to this fight you've conquered. People like you give me hope. Thank you. Love, Tianne Pierce. pierce.tianne@gmail.com