Last Christmas I was sick and stuck in a hospital room. This Christmas I am walking in the New York holiday magic and singing along to carols in Rockefeller Center. I'm counting my blessings. 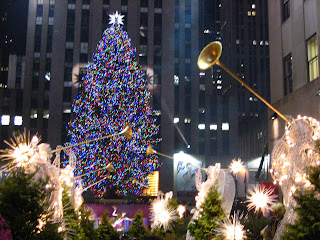 Here's my dorky gift: An attempt to identify the musicians in "Do They Know It's Christmas?" I've always loved this song.


I don’t recognize EVERYONE but this is what i do know (or at least i think i know):

Much Love,
Christine
Posted by Christine at 2:00 AM 3 comments:

The Midnight of Hope

Recently my Writing for Wellness group at City of Hope was asked to pen a poem about New Year's. Recalling exactly where I was last year, and the miracle that I am still *here* this year, this poem just sort of wrote itself. It's a bit dippy, but I thought I would share it anyway.

I've lost many friends to cancer this year. Fellow warriors and fellow hearts. Each one of us equally frightened, yet equally determined. Each one a compelling, inspirational story of courage and hope. All of us in mutual support of one another. Sometimes I feel guilty that I am still here and they are not. This holiday season, I am taking nothing for granted. This holiday season, is in remembrance of them.

Not only is life precious, but it is precarious. We are far more fragile than we let ourselves on to believe. But we are also far more resilient.

Hold your loved ones closer this year. Forgive and be giving. And for those who have loved ones spending their first Christmas in heaven, know that when you feel the Christmas spirit in your heart, it is them loving you.


The Midnight of Hope


Spent last New Year’s Eve at City of Hope
Alone in my room, didn’t know how I’d cope
Thinking of the all the champagne, the confetti, the cheers
Of others feasting and singing to welcome New Year’s

Friends came to visit but left before 10 p.m.
I didn’t want friends to miss the parties and joy offered to them
The world danced in the streets to celebrate the night
And here I was tethered, fighting for my life

Hearing the medical clicks from my IV pole
I remember, I began to cry into my pillow
Holding on to Hope and not wanting to believe
That I probably wouldn’t see next New Year’s Eve

But now it’s a year later and I’m cancer-free
This year Times Square is waiting for me
I have doctors and loved ones to thank for this
And this year, I look forward to that sweet kiss

But thinking again, I realize I am wrong
January 1st only sings a small part of the song
For if Midnight can bring Hope, about Life Anew,
Of Joy, of Freedom and of Gratitude

If in the coldest of winter, at the darkest of night
We can still find in ourselves, our own Ball of Light
Then I don’t need Dick Clark or a Fireworks display
For the anniversary of my marrow transplant is my New Year’s Day
Posted by Christine at 11:30 AM 1 comment:

In Remembrance of Elizabeth

Elizabeth and I were already close friends before we both relapsed within a week of each other two years ago. We were both given grave odds. We were both determined to beat it. We made a promise there would be a day when our yet-to-be-born children would play with each other.

Some of you may remember her from the BBQ get-together, held the week before I was admitted to the hospital for the bone-marrow transplant. Though fighting cancer herself, Elizabeth came to offer support and hope. As usual, her English wit and charm won everyone over.

Some of you may remember her from those scary few days at the hospital in Santa Monica, 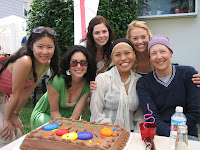 when I was close to death with that terrible infection. Elizabeth was in the middle of chemotherapy herself, but she was there in the room with everyone else, helping to lead the fight to get me better care.

Elizabeth was feisty, yet elegant. Handed down worse and worse odds with each passing month, Elizabeth handled her situation with grace and sublime defiance. Never did she lose the fire behind her eyes. With her English roots, she would often relay bad news with perfect poise and finely tuned resilience. 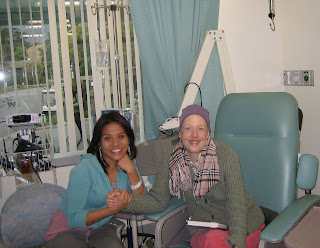 When we would meet at City of Hope for Chemotherapy, Elizabeth would say "Are you ready for your spa treatment? This is the best, most expensive spa treatment anyone can ever get! Aren't we lucky?"

Elizabeth was a global writer. Her work took her from the outskirts of Australia to an honored place within Princess Di’s circle of trust. 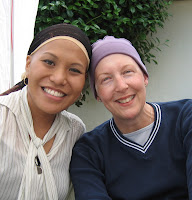 Elizabeth was truly a remarkable woman. After confessing of the declining state of her health, she would quickly brush off any pity, self or otherwise and turn bright around to say “Well enough of that! Would you like some tea? I can make us cheese sandwiches…” We would spend the afternoon talking about everything we would do once we got better. Elizabeth was so perspicacious and courageous that I didn't doubt there would be a day when we would toast champagne in Le Cap d'Antibes.

Elizabeth’s husband, James, never left her side. At one point he was holding down several jobs to keep up with medical expenses all the while accompanying Elizabeth to as many appointments as possible. He held her hand in the quiet times and fought hard for her when there was a call to battle. James was completely devoted and stood by her every step of the way. That is the mark of a true man. Today, our thoughts are with him. 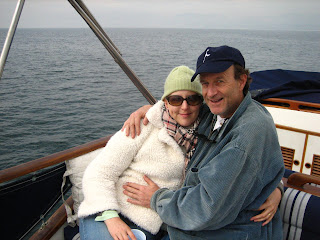 Elizabeth is deeply missed. Her indefatigable spirit continues in our hearts.

Here is her obituary published in the Los Angeles Times today:

TERRY, Elizabeth Jane Marchant March 7, 1962 - Dec. 7, 2007, a versatile journalist who lived in Paris, London and Los Angeles, was working on "Gardening Angel," a book to be published by HarperCollins San Francisco about growing and cooking with cancer-fighting herbs and vegetables and the power of gardening--for body, mind and spirit. Born in Santa Monica to British parents, she spent her childhood between Sherborne, England, and Santa Monica. Her beauty and charm, as well as fluency in French, German and English, were assets in her various journalism posts at magazines including People and Celebrity Bulletin, in Paris; InStyle, and several British newspapers in London; and the Palisadian Post, House & Garden, Vanity Fair and The New Yorker in Los Angeles. In 1999, she accepted a position as West Coast Editor for eLuxury, the online website of the French fashion conglomerate, LVMH and also launched into a successful freelance writing career covering topics that interested and amused her: gardens, home decor, travel, interesting personalities and local Santa Monica history. With good doctors, deep friendships and newfound faith she was able to continue laughing, traveling, writing, and helping others. Elizabeth is survived by her father, two brothers, a sister, a step-father, two nieces, and her loving husband, James Terry. In lieu of flowers, Terry has asked that donations be made in honor of Benjamin Shapiro to the Tuberous Sclerosis Alliance, 801 Roeder Road, Silver Spring, MD, 20910. A service will be held on December 20th at 11:00 a.m. at All Saints Church, 132 North Euclid Avenue, Pasadena. A reception will follow.

We had love left undone
We had words left unspoken
I still hold things I promised you.
Guilt withers visions of trips untaken
Of ghostly towns
And dying flowers
Dried stalks crumble in the hand.
You penned wishes in notebooks
Squeezed between paragraphs of disappointment.
We promised and planned but delayed for convenience.
A regret that cannot be atoned.
“Some day” never came.

-cp
Posted by Christine at 2:26 PM No comments:

Priestley Hugs for the Holidays 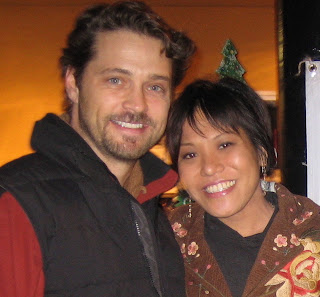 Toluca Lake held their annual Christmas Parade and Open House last night, replete with carolers, bagpipers, a bevy of cookies and candy and, for the 24th year, the Magical Christmas Caroling Truck.

Once again, Cinema Secrets, opened their doors and hosted a Marrow Drive during the festivities. My friend, Jerome Williams is still in need of a marrow donor and once again, A3M was there to lend a hand.

After we spoke, Jason was eager to join the registry and immediately said "yes", walking straight up to the sign-up table. The lovely Aileen Malig walked him through the steps of what it takes to become a donor. Ms Aileen is one of A3M's best. 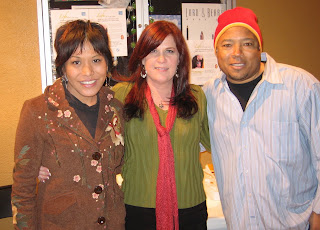 The Cinema Secrets family was generous, kind and full of life. They give so much to their community and are role models for how good business and good people can make a difference. Debra (above with pink scarf) was the main instigator of good. Not only is she beautiful but she is an angel immeasurable. 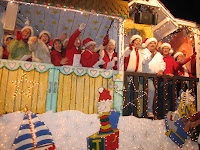 Even though people were busy shopping, snacking and parade watching, many took the time to sit down, swab their cheeks and apply to the registry. As usual, people had a lot of questions, but once they understood how easy and how awesome it is to be a marrow donor, they were reaching for the swabs. It was like a big party. The whole evening was a blast and probably one of the most fun marrow drives we've ever held! 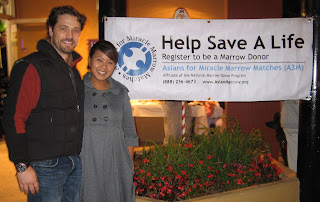 -cp
Posted by Christine at 1:54 PM No comments: