This Saturday, August 23, I will help to host the First Annual "Stupid Cancer" Bonfire in Huntington Beach. This bonfire will bring together the first inaugural group of young adult cancer survivors to celebrate another year of being young and still alive.

All are welcome whose lives have been affected by cancer. We plan on roasting marshmallows and sounding our barbaric yawps across the rooftops of the world.

We had a blast at the bonfire with attendees coming from San Diego,the OC, LA and the SanFernando Valley. Here are a couple photos. Hope you can join us at the next one! 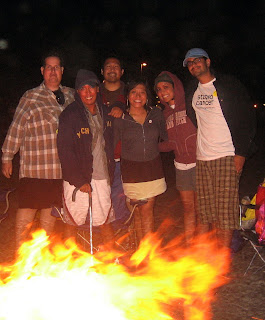 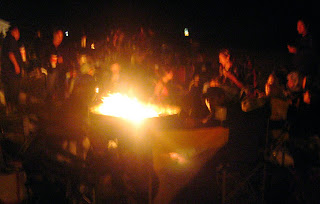 In the NEWS this week!

The surgery went smoothly last Friday and I've been at home recovering
nicely. Went off the powerful pain meds this morning after last
night's hallucinations proved to be TOO creepy for me to handle!

This Thursday, August 14, my story will be on KCBS/KCAl as part of a
larger story for City of Hope and ThinkCure. The segment is scheduled
to air during the newscasts on CBS during the 6A and 5P shows. It
also airs on KCAL during the Noon, 4P, 8P, 10P.

This Saturday somewhere in the 2 o'clock hour (to be confirmed), I
will be on KABC radio as part of a ThinkCure telethon to raise money to fight cancer. 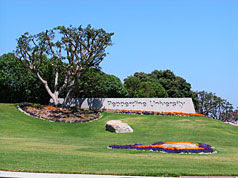 For those who have been patiently waiting (thank you!) I finally set up a separate "college fund" account. I wanted to name it "Christine's College Fund" but for various reasons the checks still have to be made out to my name. "College Fund" should be written in the memo area. After so much uncertainty, I can't describe how wonderful it feels to be making goals for the future. I never realized what a luxury that was before. Thanks again to those who have sent gifts of support! Classes start in two weeks!

Even with the upcoming surgery, there is still time to squeeze in and make a difference.

I have an TV interview with CBS this Thursday, the day before surgery, as part of a larger story they are doing about cancer-awareness.

As soon as I am somewhat recovered, the following weekend I will be on KABC radio for a live interview.

And this week, the Aug/Sept issue of Audrey magazine features a story about my cancer journey, written by Jennifer Chen.

I was at City of Hope yesterday for Pre-Op tests and the usual rigamarole. Things are a go. It's hard to believe that I still have to ask for help this far out from treatment. I got sort of depressed about it at first but then realized how lucky I was to have friends who were still there for me.

With love,
Christine
Posted by Christine at 6:55 AM 3 comments:

I went in for a routine appointment last Friday and next thing you
know, I'm scheduled to have surgery.

I will go in for the procedure this Friday, August 8. It is not
anything life threatening. We are just taking care of a small problem
brought on by the Graft vs. Host before it gets any worse. The surgery
will put me in bed for a week, strung out on painkillers. Yeah, it
stinks but it's a small price to pay for the privilege of still being
alive.

This comes at the worst time as I'm prepping for Pepperdine and still
searching for scholarship options. A few of you have asked for an
address to send checks to help. I plan to set up a separate "college
fund" account this week. Thanks so much and I will keep everyone updated.

love,
Christine
Posted by Christine at 4:41 AM No comments: