Earlier this week, Bridget Graham of the Malibu Times interviewed me for an article to help promote the marrow drives on the Pepperdine Campus this weekend. The drives are in honor of Robert Corrales, a beloved Alumnus who is fighting Leukemia and in need of a marrow match. 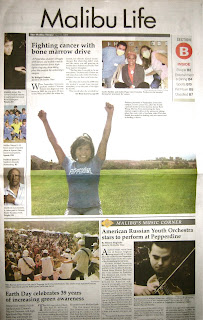 I picked up the paper last night and to my surprise, the article was the Featured Story of the "MALIBU LIFE" section! The wonderful news, really, is that I hope that the article brings more people to the marrow drives, thus more potential donors onto the registry! Here is the online version of the article if you would like more information on this weekend's marrow drives.

Yesterday, we held the first drive of this week during the game versus USC. Having gone to USC as an undergrad, I found myself torn between two loyalties, but in the end the game was about good sportsmanship and good baseball. Both SC and Pepperdine folks were signing up. When it comes to saving lives, teamwork knows no boundaries.

Before the game, I had the honor to speak in front of the stadium crowd. Despite an amusing start with a faulty mic, I was thrilled to be on the field. It is somewhat surreal to hear your voice echoing in the sky, with the Pacific churning in the background behind you, talking about how you almost died, if not for one hero. 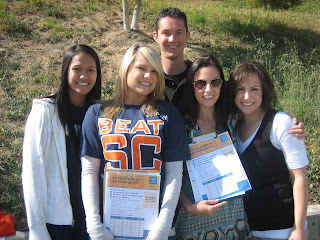 Here are some of the volunteers and organizers of the marrow drives at Pepperdine. (From L to R) Tiara Dole, Toni Nocita, Brian Watson, Heather Collart, and Janet Slightam. And thanks also to Andre Fontenelle, cameraman extraordinaire, who came to document the event!

By the way, Pepperdine won 8-5 thanks to a rally in the eigth-inning that took off with a homer by Nate Johnson.

Hope to see you there!
xxo
Posted by Christine at 10:10 AM No comments:

Pepperdine University will host marrow drives April 15th, 17th and 18th, in an effort to find a donor match for beloved alumnus Robert Corrales. This PSA was created in an effort to promote the drives on campus. It's my story, but I hope someday Robert will be able to share the same miracle with our community. Please help us spread the word!

Posted by Christine at 10:58 PM No comments: