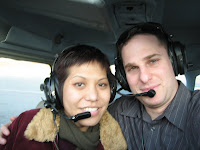 Last week began the celebration of my 35th year. The year that doctors said I probably would never see. It began with a take-off… literally.

Barak took me up in his plane and handed over the controls as we sped down the runway and took off into the sky. We soared above Los Angeles, flying over the Getty Center, past the Hollywood sign, zipping past clouds, sailing beyond the Griffith Observatory, around the downtown skyline, over freeway traffic, along the shoreline, past the Santa Monica Pier and over Mulholland. The big blue sky was all ours. It was the first time I forgot. Forgot about what the doctors' said. Forgot about my limitations. Forgot about the difficulties of the past year. Forgot about hospitals and needles, marrow and mortality. 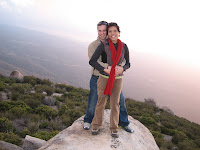 Completely forgot that I was ever sick.

For the first time in over a year, slicing through sunrays and rushing air, I felt invincible and.... free.

The week followed with a number of tête-à-têtes, tearful hugs and toasts to life. Mark took me to my first Sushi meal in almost a year and I nearly fainted when the sashimi melted in my mouth.

A miracle wish came true on my Birthday weekend. Not many people know this but with Poper's urging, I'm going to share this little intimate story. 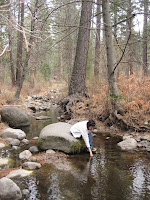 My last wish before the transplant was to be in nature. A few girlfriends and I went up to a cabin in the woods. While we were there, we had a picnic along a mountain stream. I sat on a large river stone while we all cried and prayed together. I didn't want to leave. I was afraid to leave. I was afraid of everything that was waiting for me at the bottom of the mountain. I was
afraid of dying. Then suddenly I thought, "Screw this!" and I prayed and made a wish.

I said out loud that I would return someday to the very same spot and put my hand back in the same stream, in good health, with no complications from the transplant, and completely cured of cancer. 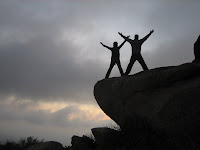 I also returned to a giant boulder where 10 months before I had shouted at the top of my lungs. With Barak, we both spread our arms out to the sky and inspired by Whitman, sounded our barbaric yawps over the rooftops.


"May you have enough happiness to make you sweet, enough trials to make you strong, enough sorrow to keep you human and enough hope to make you happy." -unknown
Posted by Christine at 11:34 PM