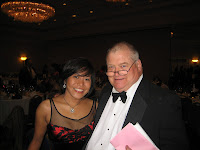 Last night I had the pleasure of rejoining my friends at Angels of Hope to raise funds for City of Hope. The last two years I had the honor of being the main speaker at their annual dinner. This year, I got a break and came as a special guest. Tim Scully (left) is also a marrow transplant survivor and remains a staunch advocate for cancer patients.

Angels of Hope is based out of Rancho Palos Verdes and many of its generous members have contributed tremendously to City of Hope's research and treatment in the fight against cancer.

My friend Andy and I got a chance to experience some close-up magic during the silent auction before sitting down to a fine dinner of salmon and filet mignon. Despite the state of the economy, the members were as giving as ever at this year's fundraiser. 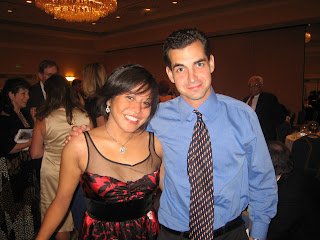 It felt good to return healthy to a place where, just two years before I was very sick, bald and uncertain of the future.

We need to remind ourselves each day as we get older, that we are lucky enough to "get older."
Posted by Christine at 11:20 AM No comments: