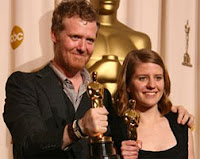 Glenn Hansard and Marketa Irglova received the Oscar for the song "Falling Slowly" from the movie 'Once' !!

Yay! I am so thrilled and and happy for them!!! Why do I mention this in my blog about surviving cancer? I have a secret to share.

For most of 2007, I was bed-ridden recovering from the bone-marrow transplant and a draining year in the hospital. Most of my time was spent shuttling back and forth from hospitals to doctor offices, then back to my apartment where I spent endless days a prisoner of low blood counts and fatigue.

One of the things that got me through this challenging period was music. But it was the soundtrack from the movie "Once" that I would play over and over again, carrying me through my most difficult times.

I have had many miracles happen in my life over the last two years and one of them was to be able to thank Glenn and Marketa for their indelible music, in person. I wasn't successful in holding back my tears, and neither was Glenn. I was shaking with gratitude as we gave/received the most heartfelt, loving, raw, pure, and fervid hug the world has ever seen. It felt like I finally made it home. 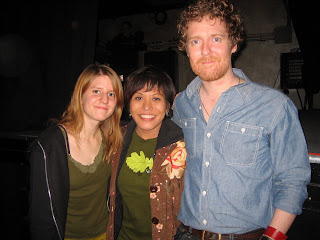 Thank you Glenn and Marketa, for reminding us that we are all truly bound together by hope.

Hugs,
Christine
Posted by Christine at 9:49 PM No comments:

I Love Man in a Uniform 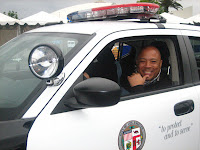 There is nothing like spending the day with LA’s Finest.

In an effort to find my friend Jerome Williams a much-needed donor, Project Africa Global spearheaded another marrow drive, this time at the Crenshaw Christian Center.

The LAPD and LAFD were having a recruitment day and thanks to LAPD Officer Joseph, who became aware of Jerome’s plight during the F.A.M.E. marrow drive, we descended upon a parking field full of young healthy recruits: perfect candidates for donating marrow.

The place was teeming with men in uniform. Most all of them were armed. I figured we were in the safest parking lot in Los Angeles that day. SWAT vans, helicopters, fire trucks, tanks and plenty of police cars also surrounded us. That meant, of course that there was plenty of giggling as we commandeered one vehicle after another. 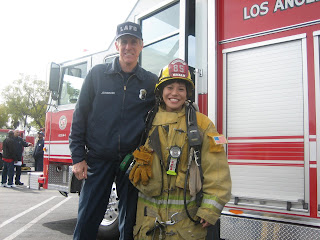 During the drive I met a few strapping firemen. Captain Johnson let me try on his firefighting clothes. I was completely swallowed up under all the material! Along with the oxygen tank strapped to my back, everything weighed close to 100 lbs! Thinking about wearing all that gear and then running into a burning building… I have so much MORE respect now for what firemen do. 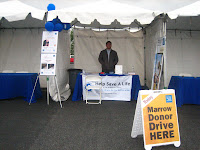 Cliff Okada from Asians for Miracle Marrow Matches stayed until the very end. While other booths had packed up and gone home, Cliff hung around to make sure that he’d be available to every last possible donor. He’s so awesome.

It turned out that many of the policemen and firemen were already signed up on the marrow registry! Yay! Noting his African-American heritage, one officer said, “It’s another way that I can help my community.” Another officer stated, “This is another way that I can help save someone’s life.” These guys are already taking bullets and charging into infernos. They don’t have to do this. But they sign-up anyway, because they know it’s the right thing to do. That’s hot.

The day ended with several more donors added to the registry, but the NMDP remains terribly lacking. For every patient that locates a potential donor, there are four who do not and thus never even get the chance to fight. Every registry counts. There's more than one way to be a Hero. 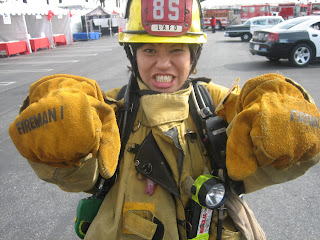 Posted by Christine at 10:11 AM No comments:

This essay was originally posted on the old "savechristine.com" website. As most of you know, the website was lost when our host server was attacked by a malicious virus. I will be reposting some sections/writings from the old website for posterity sake. And also, that we may continue what we started. The marrow registry remains lacking in minority donors. There are still many other cancer patients searching for their miracle.

I found out last night that another one of my cancer buddies has passed away. Struggling in my own fight, I neglected to ask about her. The news came from a friend who is also a survivor and who also sadly did not realize that Maria had lost her battle months before.

Maria was beautiful, even under fluorescent lights: a mocha skinned Latina with deep brown eyes. I first met Maria when her wheelchair was pushed next to mine, in the basement of a hospital, waiting in the hallway for our turn in the radiation room. We were both slouched over under the weight of nausea and exhaustion. Her hands were collapsed in her lap and by the heaviness of her small frame, I could tell she had been crying. In that moment, we became comrades fighting the same war. We were both terribly frightened.

After staring down at the speckled linoleum for some time, we instinctively turned to one other. “Doesn’t this suck?” Her voice broke apart into sobs as she spoke the words. I remember looking at her and seeing myself: A young woman in an old hospital gown. Scared. Cold. Alone. Afraid to die. Wondering what she did wrong to be punished like this. Begging God for a reprieve and pissed off at the rest of the world. It was 8:00am on a Tuesday. Most women our age were rushing off to work, going to class or seeing their kids off to school. Not us. They were alive and we were dying. It was so unfair. Acting maniacally optimistic, I slapped on a smile and rambled about how this was all temporary and this was what we needed to do to get well again. Maria just pursed her lips and half-nodded half-shook her head. The technicians came to wheel us to our respective radiation machines. We wished each other good luck. Less than one month later, Maria was gone. She never saw her 25th Birthday.

What is the meaning of life? Love. Why do we exist? To express this love.
Nothing else matters. Nothing.

Each one of us has been given a gift to give, a song to sing to this world. A doctor heals, a mother cares, a farmer feeds, a teacher inspires. Each one of us affects every one of us. And the love you give is the legacy you leave behind, and is the only part of you that lives forever. I am not a scientist or an architect. I cannot fix cars nor defend the innocent. I sing off-key and I am mediocre at sports. I don’t know if I am a good writer, but I do know that people have been moved by my words.

I have been writing since the age of 10, when I opened my first diary, but I never shared what I wrote. I kept every word, every poem to myself. I was afraid of being rejected. After I was diagnosed, I experienced a fear far worse than rejection, and that was the fear of never being heard. Of dying before you had had your chance to sing your song. So from my hospital bed, I began to share my words and poems and then the most wondrous thing happened: All the love I gave came right back to me. There was the day when an elderly man tearfully approached and sighed, “You wrote what I felt but couldn’t say”. There was the night when a girl Maria’s age hugged me and whispered, “Your words saved me.” She touched her belly and went on to share how she went from wanting to take her own life, to wanting to bring life into this world.

I made a promise to God and to myself that if I survived my illness, I would give all the love I could with whatever talent He has given me. Everyone has a song to sing. And this is mine.