"Save the Date" and SiCKO 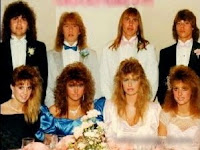 This is it. The big party to celebrate beating the big nasty "C". This will not only be a night of unconditional love wrapped up in a bunch of silly fun, but a night to look back and celebrate all that we accomplished last year, of beating the odds, of rising to the occasion, of taking something so ugly, scary and uncertain and transforming it into something far-reaching and beautiful. Not only do I want to celebrate the miracle that I am still alive, but also the miracle of life that every one of us shares at this VERY moment. Our turn on the ride. For now, the world is ours. Don't miss out on it.

Prom Night is going to rock. Why the 80s? It was the decade of "Choose Life", "Open Arms", 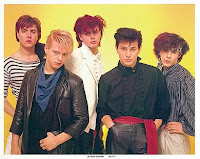 and Dancing on the Ceiling". It was a time of optimistic youth, electric keyboards and romantic dreams. We pined to "In Your Eyes", practiced our Billy Idol snarls, bopped in our basements to "Blister in the Sun", squeezed into Jordache jeans, scrunched Dippity-Do into our hair, dabbed on some "Drakkar Noir" or "L'air du Temps" and made out in the back seats of giant Buicks. We embraced life. So dust off those ruffled blue tuxedos and shiny-magenta taffeta dresses. You have six solid weeks to find yourself a babysitter, some blue eye shadow and the most atrocious outfit. Corsages and boutonnières welcomed. And don't worry about going solo; quite a few of you are deciding to go stag. We're gonna let it all go, breath out a huge collective sigh of relief. And dance our little buttooski's off! WE DID IT. The future's so bright, I gotta wear shades. Evite coming soon.

Changing gears: I had the privilege of attending an exclusive preview screening of "SiCKO"

earlier this week. After the screening, Michael Moore held an electrifying Q&A with Ron Howard. I say: See this movie. It is revealing, shocking, enlightening, depressing and hopeful all at once. There is a segment that has to do with Bone Marrow Transplantation and all I can say is that the same situation could have happened to me. One sobering fact that Moore shared in the Q&A which was not mentioned in the film: Our generation will be the first generation in the history of America that can expect a SHORTER life span than the previous generation. The WWII generation is healthier, stronger, and will live to an older age than my generation can ever hope for. [[[shudder]]] This movie helps explain why.

I have PET/CAT scans and a Bone Marrow biopsy at the end of July. They represent a sort of Finish Line to this 19-month marathon. I hope to pass with flying colors.


Alive and Kicking,
Christine
Posted by Christine at 3:37 PM No comments:

I was at City of Hope all day yesterday. And I had doctor appointments all day today. Recuperation really is a full-time job. :)

Another inexplicable-miracle-something has happened in the last week. As you all know, my endocrine system has been messed up, my pituitary gland shut down, sending all bodily systems controlled by hormones into a tizzy and that basically means the WHOLE body. The docs originally said I might have to be on medication for the rest of my life. Well, thanks to prayer and alternative medicine, the results today indicated that my endocrine system is back to NORMAL! My pituitary gland is A-OK! The endocrine doctor was "very pleased" to see that the problem was "resolving on it's own" and my oncologist was simply ecstatic. Next comes estrogen, the PMS hormone. Hopefully that issue will resolve "on it's own" too. This turn of events is simply amazing. Even I'm astounded.

Other good news, my WBC counts are officially in the normal HEALTHY range (not just the "acceptable" range). I can eat salads in restaurants now! I can go to crowded places! (Like rock concerts!) I can swim in the ocean! Also, I'm allowed to FLY on commercial airlines again!!!!! Yaaaay! I have not traveled more than 150 miles outside of LA for over a year… and haven't had a real vacation in over two years. I wish I could get a ticket to everywhere and eat huge salads on all the worlds oceans!

The one-year anniversary of the transplant will be in two weeks. July 5, 2006 was the day my whole body changed and the odds were horribly against us. Remember that wish made that we'd be watching fireworks and "saying Ooh and Aaah a year from now"? Well, I can't wait for July 4th! I'm trying to figure out ways to mark the solemn, yet auspicious day.

Prom Night has been a challenge to plan. Sorry but I spoke too soon about the date. It appears that July 28 won't work for varying reasons, plus it is very likely that a VERY important party/fundraiser will be happening that same night which a lot of us will be attending (Including myself! The Kegger4Kevin). It looks like we are pushing into August now. I'll keep everyone posted.

One request. I visited two dear friends and City of Hope patients today. Joel is a 30-something rabbinical student who is married to a beautiful and strong woman named Heather. They have three young boys together. Robin is also in her early 30s. She is married to a wonderful guy and has a little daughter named Hailey. Joel and Robin are both going through what I went through last year. They just had their transplants last week and are going through a very rough and uncertain time. I just ask everyone to say a little prayer for them. They both have beautiful souls and both have so much yet to give to this world.

The best thing we can do with our lives is to be there for each other.

Much love,
Christine
Posted by Christine at 11:53 PM 1 comment:

I got not so great news yesterday. The Graft vs. Host has gotten worse and I'm back on anti-rejection medication and now on prednisone, a powerful steroid with infamous side effects. Chronic GVH shows up in a good percentage of post BMT-patients usually around the one-year mark, but only if triggered. If treated well, the condition is merely a temporary unpleasantness. But if not kept in check, can spiral into something far worse.

Tomorrow, June 6, is the fifth anniversary of my initial diagnosis and it makes me somber to think I have been fighting this disease for so long. I remember when I first got diagnosed; I thought "Six months and then I'm out". I could have never imagined I would still be fighting up to now. Then again, the odds said that I shouldn't have made it this far. I feel both joy and sadness.

On a brighter note, this Friday June 8 there is a good chance you might see me on TV again. I was interviewed for the show "Making the Cut" airing at 5pm and 9pm on TLC. I spoke about the loss you feel when all your hair falls out because of chemotherapy. But I also spoke of the hope and joy you feel as it slowly grows back after cancer. Anyway, I thought I'd let y'all know in case you want to check it out. My hair was still uber short so I look very different.

xo,
Christine
Posted by Christine at 2:59 PM No comments:

Today was National Cancer Survivor’s Day. Every year on the first Sunday of June, events take place in communities across the nation to celebrate life after cancer. City of Hope has one of, if not THE biggest event of them all. 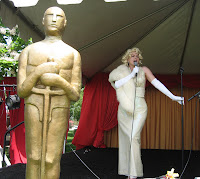 The theme this year was “Academy of Hope Awards”, complete with Oscar statues, stretch limos and the illustrious red carpet. I volunteered, dressing up like Kate Winslet from Titanic, an outfit that included a wig of long luscious auburn hair. My friend CN is a Marilyn Monroe impersonator and she fired up the red carpet while I helped welcome and take pictures of the beaming survivors. We wanted them to feel like stars. We even had paparazzi and adoring fans cheering the survivors on as they stepped out from their limos. Just being there was magical and unbelievably rewarding. One sincere smile coming from one sincere soul can restore faith in anything.

While I was there a young woman approached me and said my name in earnestness. How she recognized me in that giant wig I do not know. But she introduced herself and her eyes welled

up as she told me the story of her Mother. How a year ago her Mother was told she was dying of cancer and sorry there was nothing the doctors could do for her anymore. They gave her Mother a bottle of morphine and sent her home to die. This young woman said her mother was at first resigned to her fate but then was inspired when she saw our website. Her Mom decided to fight, went to City of Hope and was given a brand new drug that no one has ever heard of. One year later and there was her Mom standing in front of me, healthy and cancer–free. We both burst into tears and hugged each other for what seemed like forever. Her husband glowed. The young woman’s mother kept repeating, “Because of you, I am alive. Because of you.” And I smiled but all I kept thinking was, it wasn’t just me, it was everyone. My friends, my family, and people I haven’t even met who inspired her to not give up and seek the right doctors and treatment for herself. And then I felt so blessed for having such incredible people in my life. Again, what we have accomplished together is simply immeasurable.

Update on health: I go in tomorrow for another full day at City of Hope. Health-wise, there are still some complications going on with my skin, endocrine system and whatnot. But compared to other patients at 11 months post-transplant, I am doing remarkably well. 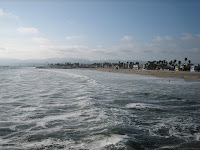 Since I started getting acupuncture treatments three weeks ago, my energy and stamina have skyrocketed. I fulfilled another wish and returned to my beloved bike path and actually pedaled all the way from Playa Del Rey to Manhattan Beach and back. Granted, I was slow and it took me three times as long to do it but I did it and even I was amazed. There was no way I could have done it 6 weeks ago. Recently I went to a party my friend was DJ’ing and was able to rock out and dance without hurting myself. Again, I was amazed that I could keep up. The best part was when some college-age kids in attendance asked “So when do YOU graduate?” “Very soon.” I thought. “Very soon.”

P.S. The other night I walked along a warm sidewalk chasing the colored sprinkles and vanilla ice cream dripping down from my cone and onto my fingers. My friends and I talked about plans for beach bonfires, the Hollywood Bowl, and camping in the Sierras. Aah, I thought, summer has officially begun. Care to join? :)
Posted by Christine at 5:10 PM 1 comment: