Oh What a Night

***(The photo upload isn't working today so I had to improvise.
Sorry for the weird layout!)***

Posted by Christine at 2:26 PM No comments:

Today marks the release of "Writing for Wellness: A Prescription for Healing". I am honored to be one of the many contributing writers in this life-changing book.

"Writing for Wellness" is based on the writer's group of the same name at City of Hope, a group I have been part of since my first treatment at the cancer center. 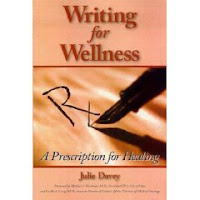 The book illustrates how one can cope, connect and heal through writing. It contains inspirational submissions by cancer patients, caregivers, survivors and family members. Truly, it is a rare glimpse into the minds and hearts of people going through one of the greatest trials of their life. It is also a practical "how to" for anyone who wants to learn how writing can help you heal.

The City of Hope writing program, presented in the book, was developed by Julie Davey, a former writing and journalism professor and two-time cancer survivor.

Because of the book, the writing program is already being adopted at other hospitals across the country. We, the writers, ultimately hope that the healing and sharing we experienced in our little group will be re-created and repeated for others. By sharing our words, we hope to help many who are going through grave and uncertain times.

The book is available through many sources, including Amazon.com.

All proceeds from the book go to City of Hope.

Hugs,
Christine
Posted by Christine at 8:07 AM No comments:

Making a Run for It

And out of the fire, good did come.

Most of this good was not by my hands but by the hands of strangers and friends. And it is wonderful to see that “good” continues to pay it forward.

A few months ago, my friend Barbara would have laughed if you asked her to trod a full mile non-stop. But after hearing the news of my clear scans and being cancer-free she thought “Wouldn’t it be great to give to another cancer patient, the chance to experience the miracle that Christine has accomplished.” A self-proclaimed “not a runner type”, she is currently in training for the Leukemia & Lymphoma Society half-marathon to raise money to fight cancer. Barbara is awesome. Check out her homepage and see a nostalgic photo of what I used to look like in that big blue hospital mask:


My friend and fellow Bone Marrow Transplant survivor, Janice and her husband Larry will be participating in the “Light the Night” Walk this Sunday in Woodland Hills. The walk raises money to, you guessed it, fight cancer. Janice and I were roommates at City of Hope. She continues to support and help patients, whether it be raising funds for research or sitting bedside to lend a hand to hold onto. Janice is a goddess. Here is her page:


Both of these fundraising walks address blood cancers, the category of cancer in which my Lymphoma diagnosis falls under. If you can contribute to help find a cure for this disease, please do. It’s amazing what a few dollars put in the right direction can do to change the world.

Changing gears. I’d like to thank the team who participated in my name (In my honor? What’s the right word here?) at the Beer Olympics in Williamsburg, Brooklyn recently. A good time for a good cause. Congratulations guys!

Hugs,
Christine
Posted by Christine at 5:47 PM No comments: